A total of 1691 responses from customer surveys conducted between January 2020 and May 2021 were analyzed by Swiss Post and Movu AG for the move study. In addition, 450,000 anonymous relocation notifications from Swiss Post were examined. This provides a comprehensive picture of the moving habits of the Swiss population. In this article, you will learn about the most exciting and important findings.

1. What are the regional differences in apartment sizes?

In order to get a more accurate picture of the housing situation of the Swiss people, the apartment/house size was broken down by major regions. The graph shows that the apartment size in urban regions is smaller than in rural areas. People in Zurich and in the region around Lake Geneva have about 14 m2  less living space than residents in central Switzerland. 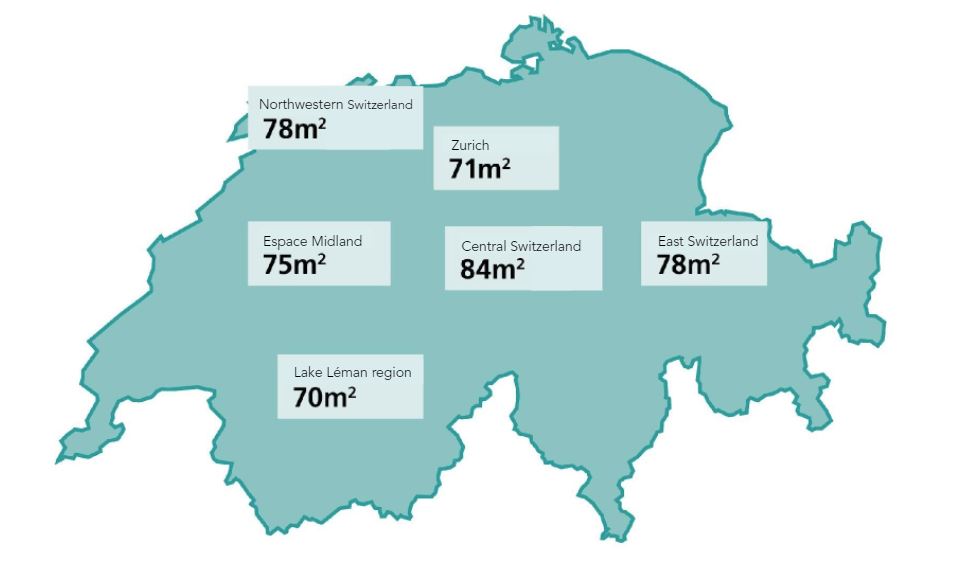 2. What are the Swiss people’s reasons for moving?

Swiss Post AG asked people in online surveys why they moved. The results showed that around 31% of respondents moved to have more living space. 25% cited a change in their family situation as the reason for moving. Moving out of the parental home applied to 16% of the respondents.

However, for the majority of respondents, there was not just one, but several reasons for moving.

Additionally, Swiss Post differentiated by different age groups: Under 30, 30 to 49 and 50 and older. For those under 30, moving out of the parental home was the most common reason at 39%. For individuals between the ages of 30 and 49, an increased need for space was the deciding factor for moving. For those over 50, many indicated that a change in family situation was the reason for moving. 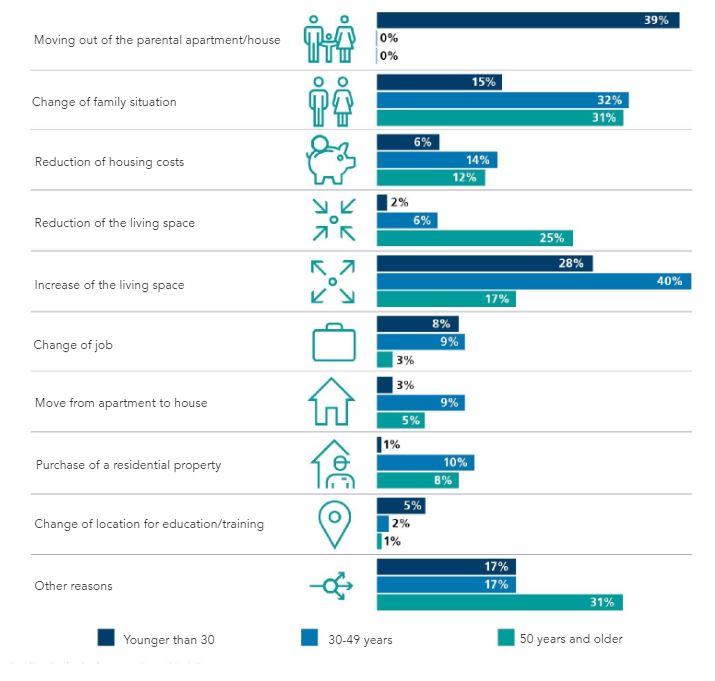 Interesting to know
According to the Federal Statistical Office, about 10% of the population moves each year. The relocation figures in 2020 have not changed much despite Corona. Even in the lockdown, the number of people moving did not move significantly.

3. When does the planning of the move begin?

When moving, you have to think of many things. It pays to start planning the move early, because the to-do list for a move is long. 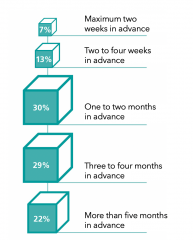 4. What moving services are being booked?

Professional moving companies as well as cleaning companies help to reduce the stress of moving and final cleaning. However, only a minority of respondents used a moving service.

The decision to book a moving service, however, depends heavily on age groups. Among those under 30, only about one in ten hired an outside professional. If one differentiates according to age, it becomes apparent that the older, the more moving services are used for transport and cleaning.

5. Where do the people of Switzerland move to?

The majority of those who moved (55%) changed their place of residence within the same city or municipality. Overall, around 86% of respondents remained in their canton of residence. 2% even moved within their previous property.

6. Where do people who are moving find their new home?

When asked “How did you find your new home?”, 58% said that they found the new residential property on online portals. The network of family, acquaintances and employer were also often activated (26%).

How much a move with a professional moving company costs, can not be answered in a general way. Many factors are decisive for the offer prices. For example, the distance or the amount of moving goods have a significant impact on the cost. If you still want to have an approximate idea of the price, you can learn more in our article, in which we calculated the average cost of a moving company, which we have arranged.

Throughout the moving process, people who are moving spend different amounts of money. For example, about a quarter of respondents estimated that they spend between CHF 501 and CHF 2000 on the move. 10% said they had invested less than CHF 500. Around 8% spent more than CHF 10,000 on the move.

Costs include not only hiring a moving company and/or cleaning company, but also new purchases. 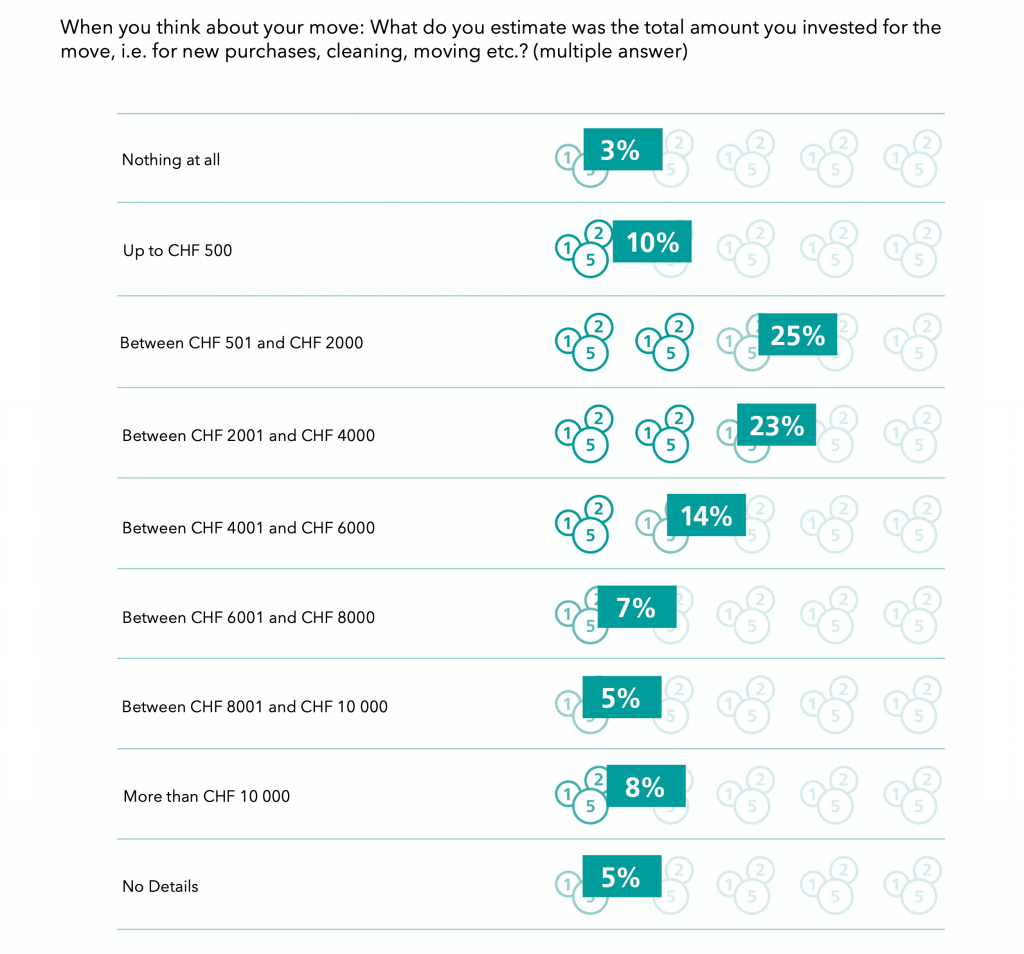 8 Which providers are being switched?

The analysis of the online survey conducted by Swiss Post and MOVU AG revealed that almost half used the move to switch contracts or sign new contracts with one or more of the service providers listed. Telecom providers (39%) and insurance companies (27%) are changed most frequently. 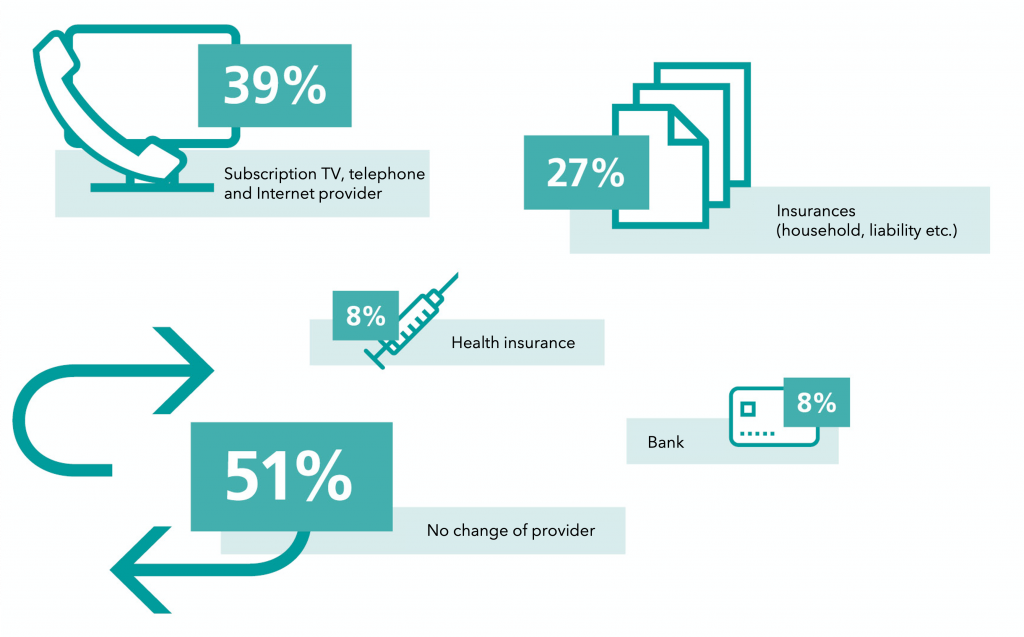 In addition to the facts mentioned about moving in Switzerland, the study has revealed other interesting results. If you would like to know more about the relocation habits of Swiss citizens, you can download the Relocation Study 2020 at the following link: