“Your place or mine?” People don’t just ask this question after a successful date, but also in relationships. If you’re lucky, you both live in the same city. But sometimes there are many kilometers between the two apartments. Whatever the situation, you both own toiletries in two sets. And then one day, this back and forth between the two apartments gets tiring. And besides, it doesn’t make any sense to pay rent for two apartments when one of the apartments is usually empty. The solution seems obvious: Move in together. The first apartment together in a relationship is definitely a mile stone in a relationship. And very often it’s also a challenge. Here are some tips on what to consider when moving in together. 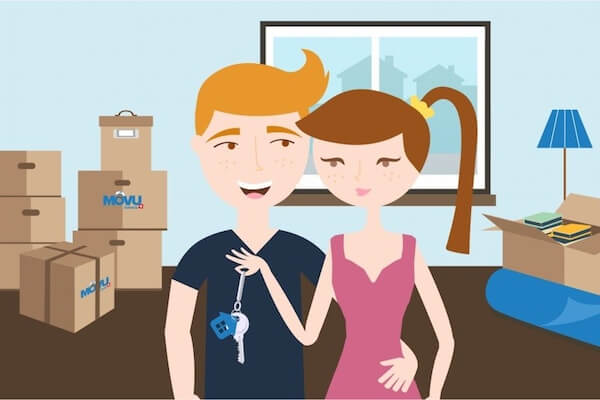 Make a conscious decision to move in together

Sure, saving costs is a good argument to put two households together. And if one room is free anyway, that’s a perfect situation. It can work out well, but sometimes it’s better, to make it a conscious decision. You should both feel the wish to take the next step in your relationship and not just as an emergency solution.

Think first: What is important to both of you?

“I definitely need a balcony!” One of you says. “I really want a bath tub!” The other one says. And maybe one wishes to be close to their favorite bar. Everyone has ideas and they need to be brought together. Before moving in together, it can be useful to make a checklist of things that are important to you. Talk about things you don’t want or cannot do without. What is more important? A balcony or a guest room? Especially in big cities, finding the perfect apartment can be difficult and one might have to be content without certain things. So even finding a suitable apartment can be an endurance test. So already try to be sensitive here.

Tip: Is your apartment big enough and your partner can just move in? To be honest, it can be easier to look for a new apartment together. That way, the other one won’t be seen as the intruder in difficult situations. However, if you decide to move in to one of your apartments, be open to some changes. Don’t just put the new furniture somewhere, instead try to furnish the living room as if you both just moved in.

You never liked your partner’s coffee table but your partner loves it. Moving in together usually means that you have to make compromises. If you’re moving into a big apartment, the solution seems obvious: Both of you get to design a room the way you like. The rest of the apartment can be furnished together. You can always sort out some pieces of furniture after a few months. Speaking of sorting out: If you’re putting two households together, you can sell some of the things on a flea market or online. Maybe you will even earn enough money to buy a new couch?

Breathe: Room for yourself

It’s a clever decision to get a big enough apartment. Especially in the beginning it can feel as if it’s getting too cramped. You’re always together, one is working, the other is watching TV. Make sure that it isn’t too tight. It can be good to spend some more bucks for a few extra square meters.

It’s also important to discuss what you intend to share when living together. Some couples prefer having their own separate rooms. Other couples don’t need that and prefer to be together all the time. It’s always different with other people, so don’t let it unsettle you, what other people say about maybe one of you sleeping in the guest room once in a while, because the other one snores too loudly. Find your own suitable way, then everything else doesn’t matter.

In order for you to get some breathing room, it’s also important that both of you can do something by yourself. Visiting the parents by yourself or meeting your best friends. Remember: Even if you’re living together, you’re both independent people with a social life.

If you’ve moved in together, there won’t be pink hearts every day. There are unsexy things that you need to do: unclogging the drain, bringing out the trash, sweeping the stairwell… So, it’s important to talk about housekeeping duties. Maybe one of you doesn’t mind getting rid of long hair in the shower but absolutely dislikes bringing out the trash? Again: Make a compromise.

Be open for your partner and do things together

Nothing is worse than unsaid accusations, the other person just doesn’t say what’s going on. Don’t do that, instead talk when something is bothering one of you. A small magical cure: If you don’t say it, your partner cannot know it. No one can read what you’re thinking. So: Speak up. Are there things that are really bothering you? Then sit together and try to find a solution. Some quirks, you might just have to accept. One more tip: Use a nice tone when it’s about accusations. That already helps a lot.

Also try to do things together, nice things. “We see each other every day.” Exactly, that’s why. Go out, take a trip, go dancing or to a bar. It’s important that you have other things to do together besides cleaning the apartment and sitting on the couch together.

A reason to party!

You’ve moved in together! Realize, how cool that is. It’s an important step in your relationship. So, celebrate your love and life, invite some friends over and throw a housewarming party of your first apartment together. Let the corks pop!