In 2021, slightly more than 10% of the Swiss population moved. Young adults were the most likely to change housing. On average, the distance between the two addresses was 13 km. These are some of the results published by the Federal Statistical Office. You can find more statistics about moving in Switzerland in 2021 from the data of the Federal Statistical Office in this article.

Evolution of the moving rate in Switzerland between 2013 and 2021

The moving rate in urban municipalities (11%) is higher than in rural municipalities (8.1%). St. Gallen is the Swiss city with the highest relocation rate with 14.9%, followed by Zurich with 13.8%.

Moving rate by age in Switzerland in 2021

Moving in Switzerland and abroad

The average rate of moving abroad was 11.1%. This varied greatly between the individual cities. The cities with the highest relocation rate abroad in 2021 are Geneva with 21.5%, followed by Lugano with 17.2%, and finally Basel with 15.6%. 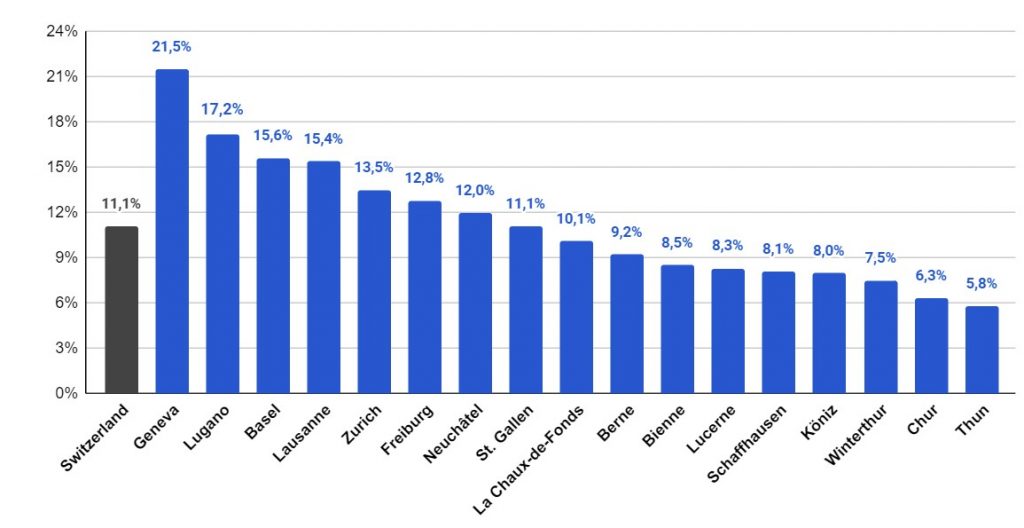 Rate of moving abroad by city in Switzerland in 2021

A majority of short-distance moves

In 2021, Swiss residents moved within the country over an average distance of 13 km.

In 39.8% of cases, they moved within a radius of less than 2 km. Only 11.1% of people moved to a new home located more than 30 km from their previous place of residence.