When you’ve just moved into your home, it’s usually on your to-do list to “install the smoke detector”: yes, but how? And is it really necessary? In this article we focus on the importance of installing a smoke detector in your new home, how to install and maintain it. 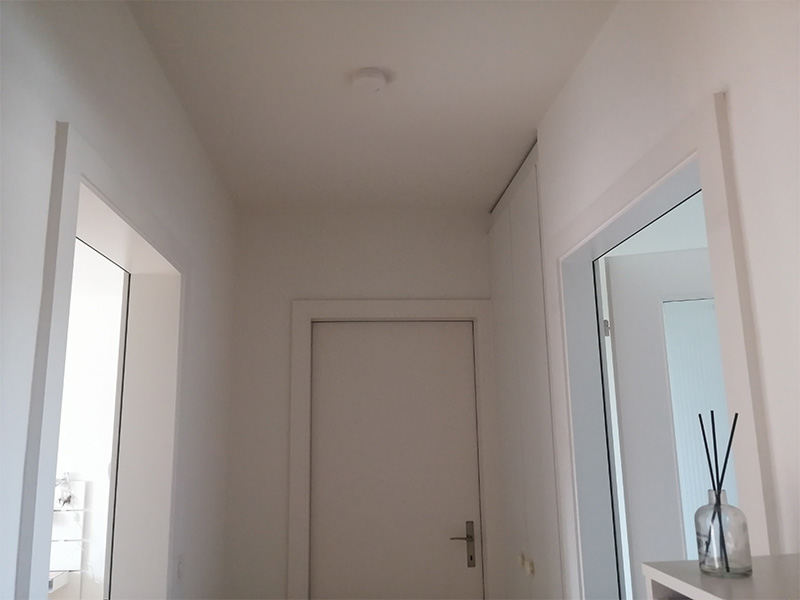 Where to place a smoke detector?

Why should I install a smoke detector?

Every year in Switzerland, up to 36 people die as a result of a fire in their home. In most cases, the cause of death is smoke and not fire. Moreover, the deaths usually occur at night: the victims were asleep in most cases and could not leave their homes in time.

In some cases, the presence of a simple smoke detector could have saved the victims. It should be noted that the installation of a smoke detector is not mandatory in Switzerland. This is despite the tragic incident in Solothurn in 2018 in which 7 people died.

A basic smoke detector costs between CHF 15 and CHF 20. A small, inexpensive, easy-to-install box that alerts the occupants of the home and, in many cases, allows the home to be evacuated in time.

Of course, some of the more elaborate smoke detectors, like smart smoke detectors, can cost up to CHF 150 and may be worthwhile if you have a large house for example. However, with a properly installed basic device, you are already protecting your entire home.

How do I install a smoke detector?

Where to place a smoke detector?

Smoke rises from the floor to the ceiling. That is why it is ideal to install a smoke detector on the ceiling and not on the walls, about 30 cm from the walls.

If possible, install the detector in the hallway leading to the bedrooms. Most incidents are triggered in the kitchen, so it is a good idea to install them between the kitchen and the sleeping area.

However, the detector should not be installed directly in the kitchen or bathroom as it could be triggered by water vapours.

Depending on the configuration of your home, you can however install it in the kitchen if there are no other solutions, but install the device as far away as possible from the oven and the cooking hob.

How do I install a smoke detector?

Installing a smoke detector is very simple. You will need:

Install the battery in your smoke detector. Attach the smoke detector to the base. Press the test button to check that everything is working properly.

Maintenance of the smoke detector

Regularly press the test button to check that the detector is working.
Dust once a month with a damp cloth without chemicals.
Change the battery once a year.

What to do in case of fire?

1 Call 118: This is the first thing to do. The fire brigade will ask you for your name and the address where to intervene
2 Save people without putting yourself in danger.
3 Close doors and windows so that the fire does not spread.
4 Fight the fire with a fire extinguisher, blanket, or buckets of water
5 Guide and inform the fire brigade